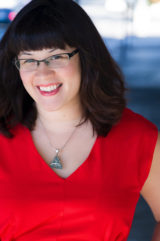 Sarah Kuhn is the author of the popular Heroine Complex novels—a series starring Asian American superheroines. The first book is a Locus bestseller, an RT Reviewers’ Choice Award nominee, and one of the Barnes & Noble Sci-Fi & Fantasy Blog’s Best Books of 2016. Her YA debut, the beloved Japan-set romantic comedy I Love You So Mochi, is a Junior Library Guild selection and a nominee for YALSA’s Best Fiction for Young Adults. She has also penned a variety of short fiction and comics, including the critically acclaimed graphic novel Shadow of the Batgirl for DC Comics and the Star Wars audiobook original Doctor Aphra. Her newest novel, From Little Tokyo, With Love—a modern fairy tale with a half-Japanese heroine—is a Junior Library Guild selection and was recently chosen as Penguin Random House’s One World, One Book title of the year, one of People magazine’s Best Books of Summer, and one of the New York Times’ YA Books to Add to Your Reading List. Additionally, Sarah was a finalist for both the CAPE (Coalition of Asian Pacifics in Entertainment) New Writers Award and the Astounding Award for Best New Writer. A third generation Japanese American, she lives in Los Angeles with her husband and an overflowing closet of vintage treasures.