A couple of weeks ago Facebook’s kinda-creepy-but-occasionally-useful algorithms reminded me it had been three years since “I Don’t See Color” had been published as part of Jim C. Hines’s first Invisible anthology. That essay still holds special significance for me as the first personal essay I’d published in SF/F fandom, and, somewhat disconcertingly, the first essay I’d written in almost a decade where I explicitly wrote about race and my feelings about racial identity. Discussing race and identity has never been easy for me; my childhood heavily emphasized assimilation and “not seeing race.” The irony is that despite (or perhaps because of) the many problems regarding representation in fandom and geek culture, it’s in large part because of my participation in fandom that I’ve at long last found my footing in exploring what it means for me to be Asian American, and reconnecting with my roots as a Filipina.

I owe a lot of that comfort and confidence to the many, many Asian American/Pacific Islander and Asian fans and creators I’ve had the pleasure of getting to know over the past several years, thanks to conventions and social media (tell me again how socializing on Twitter and Facebook is useless). It’s still shocking to realize that I now have more Asian friends than I’ve had in the past 39 years put together. I can’t understate the difference it makes knowing that you aren’t actually alone in the things you love and are trying to accomplish, and the specific struggles you’re facing (both external and internal). This is the infuriating and frustrating legacy of being underrepresented—if not downright erased—in the stories and fandoms you’re seeking enjoyment and escape in. You end up internalizing the idea that people like you are rare, that there are roles you’re just never going to play, and the desire to see yourself and your experiences reflected—much less acknowledged—as normal and valid is just asking for too much. There’s a limited number of boxes you’re allowed to get into and if they don’t fit well, you should still be grateful they were made in the first place.

Those ideas are bullshit, but it hasn’t stopped media creators from perpetuating them. See most recently: Matt Damon’s character being centered in The Great Wall; Marvel’s assertion that Danny Rand can’t be an Asian American because only a white man can feel and look out of place among other Asians in Iron Fist; the blatant whitewashing of Major Motoko Kusanagi in Ghost in the Shell and The Ancient One in Doctor Strange being held up as wins for feminism. Taken against a political backdrop where the ever-present xenophobia and racism in America has been given a massive shot of adrenaline, and the default is being yanked ever farther into the assumption that “not white” equals “foreigner” (and probably here illegally for nefarious purposes), the thoughtless erasure and Othering is enough to make you want to set things on fire (luckily I get paid to do that!).

There’s a reason why Moana was neck-to-neck with Frozen’s record at the box office, Hidden Figures made more at the box office than Rogue One, and Ms. Marvel, Monstress and the upcoming America are bringing more fans to comics. There’s incredible power in not only seeing yourself reflected in media, but seeing that representation done right as well. It reminds you that your experiences are worth being treated with respect, that there are more choices open to you than you might think, and that you can be seen as a whole person, not just through the flattened lens of white supremacy. Luke Cage broke Netflix because so many people were watching the series, after all (and yet frustratingly, predictably, Marvel decided to ignore every lesson from Luke Cage’s success in making Iron Fist but that’s a rant for another day). Escapism isn’t truly escapism when you keep finding the same microaggressions, erasure, and stereotypes in the stories you love and are trying to escape into, and we ignore this truth at our peril because it’s never “just a story.”

I’d be lying if I said it hasn’t been a struggle the last few months to believe that the work I’ve been doing in these last few years really matters, because when a good portion of your fellow citizens decided it was fine to vote a xenophobic bigot who seems to relish wallowing in his own ignorance into the Oval Office, you can’t help but wonder if any of it made any real difference after all. I joke about running on sheer stubborn spite, but it really only gets you so far before you find you’re burning out and running out of words and will.

I got a reminder just in time for my birthday. On the last day of a conference, attendees were sharing experiences over the weekend that had special meaning for them. At one point, someone got up to say how they hadn’t realized how much it would mean to have the time and space to talk about what it meant to be Asian American, and have their voice and perspective centered, and having the chance to do so at one of the conference talks was an unexpected gift. It took me a moment to realize they were referring to a talk I’d helped facilitate about exploring identity through food. I wish I’d had a chance to thank that person for their words; it was a desperately needed affirmation that what I’m able to do can still make a difference for others.

Because here’s the thing: it’s a lot less intimidating to dig into emotional scars you thought you could live with (because you know what’s underneath is still damn painful) when you realize you’re not the only one wrestling with those issues. There’s strength and comfort to be found knowing you’re not going through that journey alone. You can go a lot farther when you’re able to ask for help because you know those you’re asking understand, or at the very least can be trusted to listen and support you. This is why it’s so important to create more space for diverse voices, build communities that are actually inclusive, and fight for better representation, because it’s that much harder to understand ourselves and imagine the people we want to be if we don’t see them in the stories we love.

We should all have that chance to find ourselves in fandom. 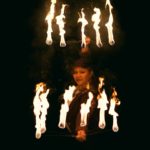 Michi Trota is a writer, editor, speaker, communications manager and community organizer in Chicago, IL. She writes about geek culture and fandom, focusing primarily on issues of diversity and representation, on her blog, Geek Melange, and is President of the Chicago Nerd Social Club’s Board of Organizers. Topics guaranteed to get her talking for hours include comics, Doctor Who, and food geekery. Michi was a featured essayist in Invisible: An Anthology of Representation in SF/F (edited by Jim C. Hines). In her professional life, she is a managing editor with fifteen years of experience in the publishing industry. In her spare time, she spins fire with the fire+bellydance showcase, Raks Geek, and at the Chicago Full Moon Jams. (photo credit to Bill Whitmire)

2 Responses to “Finding Yourself in Fandom”