About Our Cover Artist: Nilah Magruder 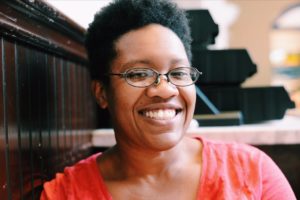 Nilah Magruder is based in Western Maryland. She is the author of M.F.K., a middle-grade graphic novel and winner of the Dwayne McDuffie Award for Diversity, and How to Find a Fox, a picture book. She has published short stories in Fireside Magazine and the anthology All Out: The No-Longer-Secret Stories of Queer Teens throughout the Ages. Nilah has also written for Marvel Comics, illustrated children’s books for Disney-Hyperion, Scholastic, and Penguin, and worked as a writer and storyboard artist in television animation. When she is not working, Nilah is watching movies, growing herbs, and fighting her cat for control of her desk chair.

In That Place She Grows a Garden by Del Sandeen

Beyond the Doll Forest by Marissa Lingen

Femme and Sundance by Christopher Caldwell

Medusa Gets a Haircut by Theodora Goss

Kalevala, an untelling by Lizy Simonen

What The Time Travellers Stole by L.X. Beckett

Fish Out of Water by Neil Gaiman

Imagining Futures: Where Our Works Go from Here by Elsa Sjunneson

Weird Plagues: How Fear of Disease Mutated into a Subgenre by John Wiswell