Episode 24B (October 2): Publishers’ Introduction, Guest Editors’ Introduction, “The Things I Miss the Most” by Nisi Shawl as read by Stephanie Malia Morris, “Convalescence” by Alicia Cole as read by Erika Ensign, and Haddayr Copley-Woods interviewing Marieke Nijkamp.

About The Cover Artist: Likhain 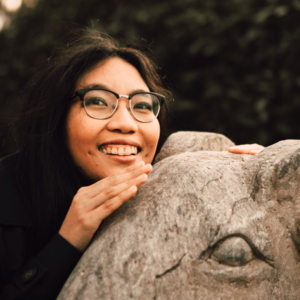 Likhain is a queer Filipina artist who migrated to rural Australia for True Love. She works in traditional media, primarily ink and watercolour, and is always keen to experiment with gold, grit, and glorious chaos to create queer postcolonial art that defies the status quo. She writes about art, mental illness, and resistance at patreon.com/likhain, and is intermittently on Twitter as @likhain.

Cover: And With the Lamps We Are Multitudes of Light

Heavy Lifting by A. T. Greenblatt

The Frequency of Compassion by Merc Fenn Wolfmoor

By Degrees and Dilatory Time by SL Huang

The House on the Moon by William Alexander

An Open Letter to the Family by Jennifer Brozek

This Will Not Happen to You by Marissa Lingen

The Things I Miss the Most by Nisi Shawl

The Stars Above by Katharine Duckett

All the Stars Above the Sea by Sarah Gailey

How to Fix a Dancer When it Breaks by Genevieve DeGuzman

You Wanted Me to Fly by Julia Watts Belser

hypothesis for apocalypse by Khairani Barokka

And the Dragon Was in the Skin by A. J. Hackwith

The Stories We Find Ourselves In by A. T. Greenblatt

Once We Were Prophets by Leigh Schmidt

The Horror and the Reality: Mental Illness Through the Lens of Horror by V. Medina

The Linguistics of Disability, or, Empathy > Sympathy by Fran Wilde

From Rabbit Holes to Wormholes: KidLit Memories by Alice Wong

Being Invisible by Joyce Chng

The Body to Come: Afrofuturist Posthumanism and Disability by Zaynab Shahar

Now I Survive by Jacqueline Bryk

We Are Not Daredevil. Except When We Are Daredevil by Michael Merriam

We Are Not Your Backstories by K. C. Alexander

Stories That Talk by Keith A. Manuel

Everything Is True: A Non-Neurotypical Experience with Fiction by Ada Hoffmann

The Only Thing Faster Than Tonight: Mr. Darkness by Elise Matthesen

A Dream to Shape My World by Eli Wilkinson

Why I Limp by Dilman Dila

Unlocking the Garret by Rachel Swirsky

Move Like You’re From Thra, My People by Haddayr Copley-Woods

Give Me Heroism or Give Me Death by Gemma Noon

After the Last Chapter by Andi C. Buchanan

Disability and Fiction by Liana Brooks

BFFs in the Apocalypse by John Wiswell

The Future Is (Not) Disabled by Marieke Nijkamp

To Boldly Go by Cara Liebowitz

My Genre Makes a Monster of Me by teri.zin