Welcome to Uncanny Magazine Issue Twenty-Seven! All of the content will be available for purchase as an eBook (PDF, EPUB, MOBI) on March 5, 2019. The free online content will be released in two stages—half on March 5 and half on April 2.

Episode 27A (March 5): Editors’ Introduction, “The Dead, In Their Uncontrollable Power” by Karen Osborne as read by Stephanie Malia Morris, “Childhood Memory from the Old Victorian House on Warner” by Beth Cato as read by Erika Ensign, and Lynne M. Thomas interviewing Karen Osborne.

About Our Cover Artist: Christopher Jones 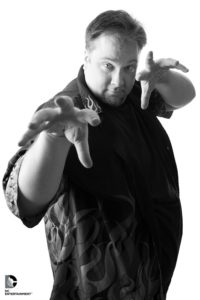 Christopher Jones is a comic book artist best known for his work on Young Justice for DC Comics and on Doctor Who for Titan Comics. Christopher is currently drawing Marvel Action: Spider-man, and recently drew a prequel comic for Young Justice Outsiders written by series co-creator/co-producer Greg Weisman. Christopher’s other work for DC Comics includes a run or more than four years on The Batman Strikes, as well as stories for Batman ‘66, Justice League Adventures, Batman & Robin, Day of Judgment and the cult series Young Heroes in Love. His Doctor Who work includes The Third Doctor: Heralds of Destruction with writer Paul Cornell and The Seventh Doctor: Operation Volcano with writer Andrew Cartmel, in addition to a variety of covers featuring the 13th, 10th and 11th Doctors.

The Dead, In Their Uncontrollable Power by Karen Osborne

Every Song Must End by Bonnie Jo Stufflebeam

A Sharp Breath of Birds by Tina Connolly

On the Lonely Shore by Silvia Moreno-Garcia

Before the World Crumbles Away by A. T. Greenblatt

Other Forms of Conjuring the Moon by Chloe N. Clark

things you don’t say to city witches by Cassandra Khaw

Courage to the Sticking Place: Connecting SF/F Students With Creators by Tracy Townsend

All in Good Fun: How Fanfiction Reignited My Passion for Writing by Briana Lawrence

“We Are What They Grow Beyond”: Star Wars and the Extended Universe by Suzanne Walker

That Never Happened: Misplaced Skepticism and the Mechanisms of Suspension of Disbelief by Marissa Lingen