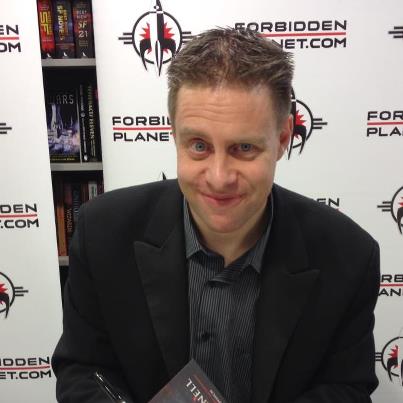 Paul Cornell is a writer of SFF in prose, comics and television. He’s one of only two people to be Hugo Award-nominated for all three media. He’s written Doctor Who for the BBC, Wolverine for Marvel and Batman and Robin for DC. His urban fantasies, the Shadow Police novels, are London Falling and The Severed Streets, out now from Tor.

1. You’ve done it all – television, novels, comics, short stories, audio plays – how do you use short fiction to tell stories differently than other story telling formats?

It’s the hardest thing I do. It’s a very pure form, all about creating a situation and characters and working through a single concept. I think in many ways it’s the ideal mode for big idea SF.

2. Not only have you created amazing original characters, you’ve also played in some pretty fantastic sandboxes. If you could create a crossover using any character you’ve created or written for, what characters would you choose and why?

I have so many Doctor Who crossover stories in my head, notably a Patrick Troughton’s Doctor/Original Star Trek one that one day I will get to professionally write for someone!

Just going back to writing a novel every morning is a challenge to oneself. There’s also the continual challenge to be honest, to not shy away from the tough stuff because you’re afraid of the audience. You’re not necessarily trying to please them, you’re trying to satisfy them, which can include engaging their darker emotions, and my own.

And here’s an immediate example of the above! I’m going to be honest: I had some impossible experiences in my childhood, about which I’ve written a novel which nobody’s heard about yet. Also, my numinous contact experience, which left me feeling I should choose a religion. That was a bit more than you were expecting, wasn’t it?