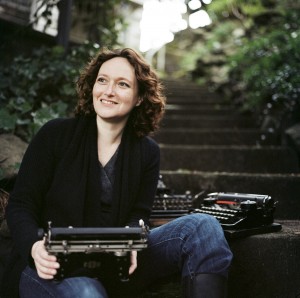 Mary Robinette Kowal is the author of The Glamourist Histories series of fantasy novels. She has received the Campbell Award for Best New Writer, three Hugo awards, and the RT Reviews award for Best Fantasy Novel. Her work has been nominated for the Hugo, Nebula, and Locus awards. Her stories appear in Asimov’s, Clarkesworld, and several Year’s Best anthologies. Mary, a professional puppeteer, also performs as a voice actor, recording fiction for authors such as Seanan McGuire, Cory Doctorow, and John Scalzi. She lives in Chicago with her husband Rob and over a dozen manual typewriters. Her story “ Midnight Hour” appeared in Uncanny Magazine #5. Visit maryrobinettekowal.com

1) You recently completed your Glamourist History series. Each one is a little different in structure: you’ve done a romance, a spy story, a political thriller, a heist, and you’ve described the last book as your “grimdark” story. Looking back, did you have a favorite out of those different story types?

I really enjoyed the heist novel structure, but the one that I found most interesting was the grimdark. Why? Because my initial approach to the novel was thinking about Downton Abbey and how it is structured based on soap operas. What I discovered was that when you apply that structure to a fantasy novel, it naturally veers into grimdark. That was a little bit surprising, but made sense when I thought about it. In soap operas, things are heightened and always, always getting worse. There’s just not as much blood and dirt as in a fantasy novel.

2) You’re an experienced puppeteer and recently completed a several week-long puppetry workshop at the Jim Henson Studios. What was the most surprising experience you had at the workshop?

The workshop was heavily improv based. I haven’t done any formal improv since high school. What surprised me was how many exercises were like the POV exercises that I do when teaching writing. I suspect that a lot of writers would be well-served to take some character based improv classes.

3) Anyone who follows you on Twitter and Instagram knows that you love to make pies. What is your favorite pie – and which fictional character of yours would you most like to share it with and why?

I am a sucker for a pecan pie, which I almost never see and rarely make. If I could, I’d share it with Elma York, from “Lady Astronaut of Mars” because she’s based on my grandmother.