Happy Holidays, Space Unicorns! There’s plenty of the holiday spirit here at Uncanny, so several of our editorial staff decided to share some of our favorite pieces of media for the holiday season. If you’re looking for something fun to watch, listen to, or read as the holidays approach, we hope you’ll find something to enjoy in our suggestions!

Erika Ensign, Podcast Co-Producer and Podcast Reader
This Christmas I bring you the gift of music! I used to pretend I hated holiday music because it wasn’t “cool” to like it. When I grew out of caring what other people think about the things I enjoy, I admitted I love December because radio stations (two in my city of Edmonton!) play nothing but holiday and holiday-adjacent music. (I’m sorry, but “River” by Joni Mitchell isn’t really a Christmas song, even though it mentions Christmas. Neither is Leonard Cohen’s “Hallelujah.”) Sadly, local radio is rather limited in its choices. There are so many great holiday songs I never hear on the radio, so I wanted to share a few of the poppier tunes I wish I heard more often.

“I Want an Alien for Christmas,” by Fountains of Wayne, is a delightful little ditty that’s about exactly what you’d expect from the title. It is upbeat and peppy and full of clever turns of phrase like “I want a little green guy about three feet high with 17 eyes who knows how to fly.”

Weezer released a two-track Christmas EP in 2000, which has brought me a great deal of holiday joy over the years. “The Christmas Song” is very much an example of Rivers Cuomo at his whiny-piniest, but that’s one of the things that drew me to Weezer in the first place, so I am so on board for a schmaltzy-waltzy song about being lonely at the holidays. “Christmas Celebration” is much more upbeat—at least the music itself is. The lyrics are cynical and sarcastic. One of my favorite genres is poppy-peppy songs with pessimistic lyrics, so I am here for this. In the interest of calling out the problematic bit of a problematic fave, I really do not like the fat-shaming in this one so I come back to this track less often than the previous tune, even though this one is peppier and I like the tune more.

Stephanie Malia Morris, Podcast Reader
It’s that time of year again, when a combination of so-close-you-can-taste-it holiday PTO and end-of-semester stress and relief (I work in a college library and absorb both from students and faculty alike) send me tailspinning into various obsessions. This year’s monkey is named murder: I’ve been gobbling up Tana French’s Dublin Murder Squad series while I wait (#223 of 223 holds!) for her latest book, The Witch Elm, to arrive at the local library. I did not realize I needed the Dublin Murder Squad books until I read In the Woods and fell into immediate, transcendent hate with the main character, a detective haunted, much like Scrooge, by the ghosts of past and present raised by the novel’s central case. The Dublin Murder Squad is everything I have ever wanted in a good murder mystery: tight plotting, intriguing characters, detailed research, settings so vivid they too are characters. As a holiday bonus, the series has a thing for the holidays and winter weather, from unheated interrogation rooms to catching murderers over Christmas dinner.

Animaniacs came into my life in a somewhat backwards manner: its finale (this film) released a year after I was born, and by the time I was old enough to watch TV, the most regular rerun from the series was Wakko’s Wish every Christmas. It’s highly representative of the zany, whip-smart show.

In Wakko’s Wish, orphans Yakko, Wakko, and Dot live in a town suffering under the greedy king’s tyrannical fist. Dot is sick in a Victorian-waif way, and Wakko works for a year to earn a ha’penny (as a kid, I thought this was an imaginary, infinitely large unit; learning he’d earned half a penny is both hilarious and almost relatable) to pay for Dot’s medical expenses. The ha’penny is promptly lost to the king’s tax collector, and desperate, Wakko wishes on a star. It works! Sort of: the Warners must travel to where the star fell to claim their wish, and when the town—and the king—catch on, it becomes a race.

If you’re not already raring to (re)watch Wakko’s Wish, consider its fantastic sense of humor and its extremely catchy tunes. “It’s all for one and one for all — times three,” sing the Warners in a blend of individuality and common goals that I really relate to as the eldest of a trio of siblings. Overall, Wakko’s Wish is a great movie if you want to add some festive songs to your roster while visiting old friends.

Steven Schapansky, Podcast Co-Producer
I’ve never had a favourite Christmas movie or TV show growing up. I vaguely remember watching bits of The Grinch Who Stole Christmas and Frosty the Snowman when I was a kid, but it never really stuck. Actually, my main memory of watching a movie at Christmas is when my Mom needed to wrap some presents and sent my Dad on a mission to the local theatre to keep me and my sister occupied by watching “Pinocchio” (a movie that traumatizes me still).

The award for my favourite Christmas viewing was finally claimed on Christmas Day, 2010, when I watched the Doctor Who Christmas Special A Christmas Carol. It was the first such special for the new Doctor Matt Smith, as well as the Yuletide debut for head writer Steven Moffat. Moffat crafted a brilliant time travel infused take on the traditional Charles Dickens tale, which involves the Doctor having to convince a miserly Scrooge-esque figure to allow a crashing spaceship to be saved by going back in time to show him his past, present, and future, and how he could be a better person. It’s at times hilarious, thrilling, sad, moving, and it’s topped off by a wonderful child-like performance from Matt Smith. It also has a flying shark. God bless us, everyone.

Lynne M. Thomas, Co-Publisher/Co-Editor-in-Chief and Interviewer
I’m a sucker for The Avengers, the 1960s spy show with a strong leaning towards SF/F, particularly the era featuring Patrick McNee as John Steed and Dame Diana Rigg as Mrs. Peel. Steed and Peel have a delightful on-screen relationship where the champagne flows freely, they respect each others’ skill sets and rely upon each other utterly as partners while looking FABULOUS, and they flirt outrageously, all the while foiling 60s spy plots. The holiday episode “Too Many Christmas Trees” takes this to its best possible extreme, introducing telepaths that are trying to steal secret’s from Steed’s brain at a Dickensian-themed Christmas house party. Which means that we get not only fabulous 60s clothing, we get costumes, including Steed dressed as Sidney Carton from A Tale of Two Cities (swoon) and Peel dressed as Oliver Twist. While I am here for all of the Steed/Peel banter, and it is DELIGHTFUL, my favorite part is the ending kicker, which takes a long-running subtext and makes it text.

Michael Damian Thomas, Co-Publisher/Co-Editor-in-Chief
People are much too hard on the Star Wars Holiday Special (Singing Bea Arthur! Life Day! A VERY HAPPY Grandpa Itchy!), but I’m not here to defend that. No, I am here to tell you all about the greatest moment in Star Wars holiday history: Christmas in the Stars: Star Wars Christmas Album

This glorious album was created by Meco, the genius behind the Billboard #1 hit disco version of “Star Wars Theme/Cantina Band” (he later followed that up with the “Ewok Celebration” which features a RAP BREAKDOWN IN EWOKESE!). 1980’s Christmas in the Stars is a Star Wars concept album featuring Anthony Daniels as C-3PO. He and R2-D2 are visiting a droid toy factory making toys for the S. Clause. What follows are a series of songs about their Space Toy-making adventures and teaching R2-D2 the true meaning of Christmas! Listen to Anthony Daniels talk-singing like a metal Henry Higgins in “Christmas in the Stars”! Dazzle at the should-have-been-a-holiday-standard “What Can You Get a Wookiee for Christmas (When He Already Owns a Comb?)”! And be amazed by “R2-D2 We Wish You a Merry Christmas,” which features the first recorded vocals of Jon Bon Jovi! Really.

Listen! Enjoy! Discover the meaning of bells in space! Then go and enjoy the oral history about the making of THE GREATEST CHRISTMAS ALBUM OF ALL TIME!

Michi Trota, Managing Editor and Nonfiction Editor
If you follow me on Twitter, you’ve very likely seen me geeking out over Leverage. The show hits so many of my favorite story-telling spots: found-family, intricate puzzle heists, pop culture references, competence porn, a character who loves food. And there’s even two holiday themed episodes! While “The Toy Job” in season 5 is perfectly lovely, the season 3 episode, “The Ho, Ho, Ho Job” is on my shortlist of “things I watch every year for the holidays.” The episode has everything: a villainous plot to exploit Christmas for selfish gain, a literal plea for help from Santa, heists-within-heists with loads of delightful misdirection, a character’s grumpiness over the holidays that belies a truly giving nature, sharp dialog and banter, and even Die Hard references (Go Team “Die Hard Is a Christmas Movie”). Most importantly, the episode doesn’t just show how good Nate, Sophie, Eliot, Hardison, and Parker are at what they do, it’s the perfect snapshot of how much of a family they’ve grown into, and how deeply they’ve come to respect and understand each other. I can’t think of anything better for the holidays. 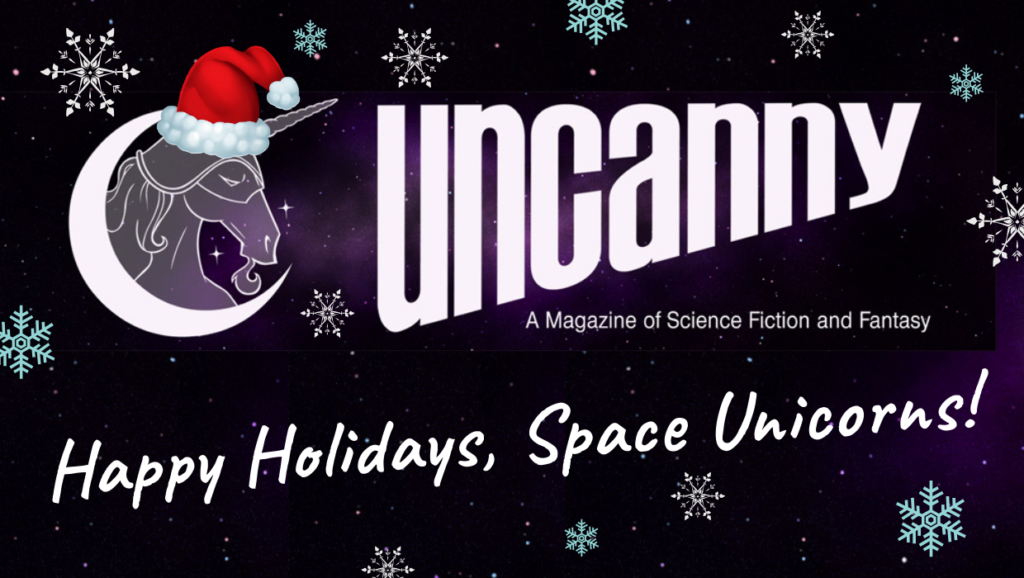