Imagine 2200: Climate Fiction for Future Ancestors is the first climate-fiction contest from Fix, Grist’s solutions lab. Imagine 2200 asked writers to envision the next 180 years of equitable climate progress. Fix Network Weaver Tory Stephens caught up with two of the contest finalists, Ada M. Patterson and Tehnuka, to talk about how fiction can help create a better reality.

This interview has been edited for length and clarity.

Tory Stephens: What drew you to enter the Imagine 2200 storytelling contest?

Ada Patterson: I heard about it through adrienne maree brown’s social media. There were a lot of turbulent things happening in Barbados and in my life at the time. So even though I had never written climate fiction, I felt it would be a nice challenge. And it gave me a lot of space to speak through the things that were going on. Honestly, I didn’t think my story would be selected, because I didn’t think it was hopeful enough.

Tehnuka: I also hadn’t written much science fiction. And writing about climate change doesn’t usually give me a lot of hope for the future. This gave me a chance to think about it from a different perspective, to ask: What happens if we work together? How might an equitable future look?

Tory: Now that you’ve both published sci-fi stories, do you think you will continue exploring the genre?

Tehnuka: This is my first published science fiction story, and this experience has increased my confidence in writing science fiction. My story is informed somewhat by my background in earth sciences, but I realized that science fiction is not all about science for me—it can be about human experiences and society.

Ada: Well, I do not have any kind of science background! I’ve always been fascinated researching the climate crisis and seeing how it intersects with sex and gender identity. My story wasn’t altogether hopeful, but science fiction makes it feel possible to imagine a future for my island and our community, to have hope for a trans future. That’s something I’m struggling with now personally, that the island will be gone. There is this threat of disappearance. Using science fiction as a tool, that was the first time I felt, strangely, hopeful.

Tory: Can you tell us more about how your identities and life experiences influenced your stories?

Ada: It was an especially potent time for me to imagine a future for trans people—at the time I wrote my piece I just started hormone replacement therapy, and then [because of the pandemic there was] a shortage of medication in Barbados. I research a lot and think about things like how plasticization has affected our water by leaching estrogen-like chemicals, or how sea turtles in our local waters are producing more female offspring because of warming sand temperatures. [Imagine 2200] gave me space to think about what it can mean to be queer or trans in a climate-queered world, and how all of these observable realities are already expanding and forming a different kind of world.

Tehnuka: I wanted to explore a sense of belonging. In all aspects of life some of us find it harder to belong than others. I’m Tamil and my parents are from Sri Lanka. I was born and live in a colonized country [Aotearoa New Zealand]. Being from an ethnic group still dealing with the effects of colonization, and feeling sucked into a system that aligns you with the colonizer, how do you then find belonging? My protagonist’s identity, like mine, is tied to the experiences, culture, and immigration of generations before her. Like me, she feels caught between worlds.

Ada: The “between worlds” feeling is really resonant: being conscious of the climate crisis and your position in it [as a colonized person], and feeling the precarity, feeling a complicated love for the place as well. There’s something confronting about it—I drowned my entire island in order to make another future possible! Or, rather, that was the future I saw coming, and I needed to see something after it. But I think there’s that common kind of complicated pull that our characters all felt for these places [in our stories].

Tory: Ada, it was interesting hearing you say that you didn’t expect your story to be selected, because you weren’t sure if it was hopeful enough. Our goal at Fix is to advance solutions to the climate crisis instead of focusing on the problems that have been covered over and over. Can you speak to the challenge of having hope amid the climate crisis?

Ada: For me, imagining these kinds of futures is a response to the resignation that I’ve seen in some people. I don’t have a lot of time for this kind of output that resigns itself to, “It’s the end of the world.” I’m just like: “Is it?” [Climate fiction] is also a response to the lived reality of the climate crisis that people of color experience the harshest every day. Some of us have already been living in what can be termed an apocalypse. In Barbados, we have been facing the reality of rising sea levels for some time.

Tehnuka: It was amazing reading your story, Ada. There was such a strong sense of place, and it captures the balance between accepting the changes that are inevitable and finding a way to make things more equitable within that.

Going back to the idea of hope, a lot of us don’t think stopping climate change is realistic, but we know we need the human world to change. It always comes back to capitalism for me—we do need that to change to cope with climate change. But disaster capitalists are constantly profiting from disasters, and even creating them. What if, instead, we can make sure disasters create a better future for everyone?

Ada: When I think about this idea of the end of the world, I think about Black feminist ideas, Afro-pessimist ideas, which are about different kinds of liberation—and which are only possible when this world that we live in is over. We are bankrupting the ideals of this world that only empowers certain communities of people, that empowers the few by stepping on and displacing others. To bankrupt that kind of world, I hope for that kind of apocalypse.

Tory: I hope for that kind of apocalypse!

Tehnuka: I really agree, and hope looks different for everyone. I think that’s why climate fiction is powerful; we can explore the aftermath of colonialism from different perspectives.

Tory: Was there anything that surprised or stood out to you about the other stories in the Imagine 2200 collection?

Tehnuka: I loved the range of stories. What stood out for me was that many of these futures could exist at the same time; the worlds people created didn’t feel mutually exclusive.

Ada: I completely agree. I wouldn’t say surprised, but I’m curious about the capacity for hope—a certain kind of hope—in different communities, and what kind of hope is more appealing in certain contexts.

Tehnuka: And that we are not writing utopia if we’re asking, “What does an equitable future look like in a colonized country?” We’re still writing human worlds, imperfect worlds. I didn’t want to write a utopia because that didn’t make sense to me. Not letting capitalism, a system where some people succeed on the backs of others, into the story, while keeping the element of things not being quite there yet—because things will never be quite there yet—was important. There are still people who can’t live as they want to in my story. The difference is that it’s understood.

Read all 12 stories in the collection for free at Grist.org/Fix. 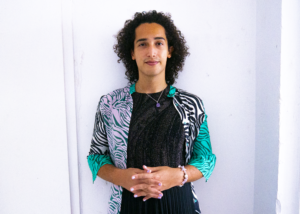 Ada M. Patterson (she/they) is an artist and writer based in Barbados and Rotterdam. Their story, Broken From the Colony, imagines a future in which a Caribbean island community is devastated by a hurricane and most of the survivors are trans girls who become part of the ecosystem themselves, transitioning into human-coral hybrids. 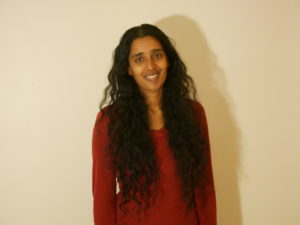 Tehnuka (she/they) is a second-generation Tamil tauiwi volcanologist from Aotearoa (New Zealand). Their story, El, the Plastotrophs, and Me, is set in a future co-op where each new birth is approved by the community and an unexpected pregnancy triggers an existential crisis for Malar, the story’s protagonist.